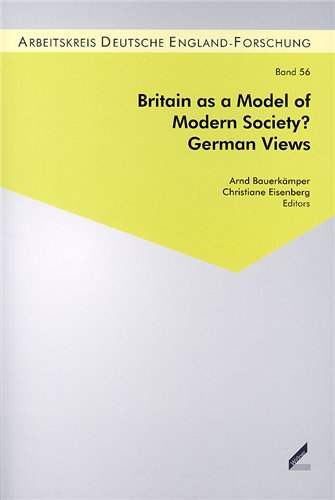 Britain as a Model of Modern Society? German Views

Has German curiosity about developments in Britain varied over time? To what extent has Britain's path into modernity been seen by Germans as a panacea or threat with regard to challenges and problems which they have been confronted with? Which dimensions and strands of Britain's development have been perceived as adaptable to Germany? Who has transferred knowledge about the British Isles to Germany?
The volume is devoted to these questions, which shed light on the role of Britain as a model of political, economic, social and cultural developments in Germany during the last two centuries. Processes of appropriation on the one hand and rejection on the other receive as much attention as the role of mediators and the channels of communication and transfer. Case studies in these issues engage with recent debates on comparison and concepts of transfer and entangled history.

The editors: Arnd Bauerkämper is Managing Director of the Berliner Kolleg für Vergleichende Geschichte Europas and Privatdozent at the Department of History, Free University of Berlin; Christiane Eisenberg is Professor of British History at the Centre for British Studies, Humboldt University, Berlin.

Britain as a Model of Modern Society? German Views