After the First World War, members of the British, American, and German delegations to the Paris Peace Conference founded the British Institute of International Affairs, the Council on Foreign Relations, and the Hamburger Institut für Auswärtige Politik. The experts on foreign affairs believed that it was possible to use scientific research to engineer German democracy and to stabilize the global political and economic system. They organized transnational meetings such as the Königswinter Conferences in order to strengthen international law, free trade, and parliamentary democracy. The Observer, Die Zeit, and other renowned newspapers published these deliberations. This book traces the impact of the institutes on Germany after the two World Wars from the Paris Peace Conference to the fall of the Weimar Republic and from post-war reconstruction to Willy Brandt's Ostpolitik. It charts a new history of the Western institutes and the post-war Königswinter Conferences and argues that the pragmatic internationalism embraced by these think tanks contributed to a fundamental liberalization of the Federal Republic's foreign policy.

Christian Haase is Lecturer in Modern European History at the University of Nottingham. This book is the revised version of a doctoral thesis, submitted to the University of Oxford, which was awarded the Annual Prize of the German Historical Institute, London. 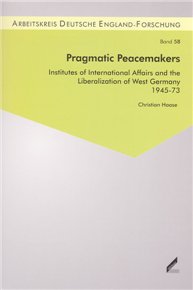